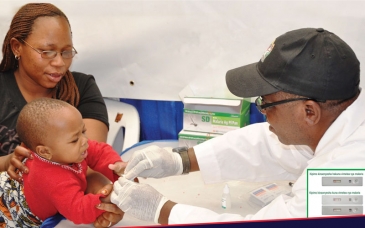 Malaria is known to be the largest single  component of the burden of diseases in Tanzania for both morbidity and mortality especially for under fives and pregnant women. In Dodoma region, the prevalence of malaria among underfives is 12.5% while, in Bahi District Council, about 60,000 people of all ages suffer from malaria every year.

Malaria diagnosis is first suspected on defined features and then confirmed by laboratory tests mainly through microscope; however in the year 2010, the cheapest and easiest laboratory test was introduced in Bahi District Council namely Malaria Rapid Diagnostic Test (m-RDTs).

Malaria Rapid Diagnostic Test (m-RDT) is a test that assists in the diagnosis of malaria by providing evidence of presence of malaria parasites in the human blood within a very short period of time and it’s considered to be user friendly as it doesn’t need one to have advanced lab training.

The prevalence of malaria in our district council was reported to be higher prior to introduction of m-RDTs, and malaria was always ranked number one in the district’s top ten diseases. However, after the introduction of  m-RDTs in the year 2010 there has been changes on the trend of the top ten diseases as the number of malaria cases is  currently on the decline compared to the same period of time before the use  this rapid test. The aim of this study was to determine the success obtained after introduction of m-RDT as a tool for diagnosis of malaria in Bahi District Council.

The study design was descriptive comparative study, in which District Health Information System data base gathered from Health facility reports were used. The information obtained was organized and computerized in a soft ware. Analyses were based on descriptive and comparisons between two periods of January – June 2011 and the same time period of the year 2010. All tests were done using relevant statistical tests.

The findings reported a high number of malaria cases between January and June 2010 when both microscope and clinical diagnosis for malaria were still used in the diagnosis of malaria, compared to the same six months-period of January to June, 2011 when we started using malaria rapid diagnostic tests (m-RDTs) as an adjuvant doagnostic modality for malaria. In overall malaria case diagnosis was reduced by 65% for under fives, 58% for above five years and 63% for patients of all ages. This difference was found to be statistically significant. In the year 2010 malaria was leading among the district’s top ten diseases reporting 39,295 cases followed by Acute Respiratory Tract Infection (ARI) which had 17,126 cases. On the contrary, until June 2011, ARI was reportedly leading with 21,244 cases followed by malaria with 17,126 cases.

Microscope remains the gold standard for malaria diagnosis, however due to reasons such as lack of skilled laboratory personnel and unavailability of microscopes and reagents, the best diagnostic modality at the moment would be malaria rapid diagnostic tests which can help in the over- and/or mis-diagnosis of malaria and patients’ mismanagement who actually have other diseases than malaria.

From our findings we recommend that, it is time now we review our malaria treatment guidelines including its testing algorithms  in order to improve the quality of health care delivery through proper management of malaria cases by use of m-RDT especially for the developing countries.

The author declares no conflicts of interest.

The author is Public Health Specialist, and a District Medical Officer (DMO) for Bahi District Council in Dodoma, Tanzania.